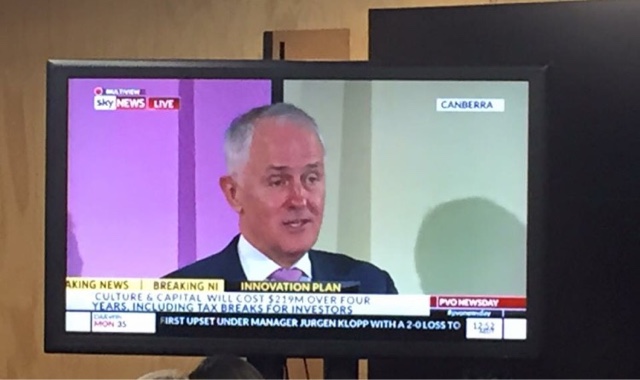 The Most valuable capital is human capital, which is why we need recruit, train and maintain this amazing resource!
We need to create an environment where companies , entrepreneurs can innovate, take risks and be supported by private industry, and for these supporters to be applauded and rewarded.
The 4 pillars of the Innovation Package:-
– Culture and Capital,
– Collaboration,
– Talent and Skills, and
– Government as an Exemplar.
Includes
– entrepreneur visas – encourage talent to come to Australia
– cash for CSIRO,
– tax breaks,
– Education as a key pillar
– Changes to bankruptcy laws – easier to fail
– Cgt exemption for investors in startups with 3yr + gestation
– Generous income tax rebates for retail investors
– Funding to align and connect university research to business
– Encourage smes to bid for it work for government

The package’s major initiatives are:

Tax:
The tax incentives for investors will be modelled heavily on the United Kingdom’s Seed Enterprise Investment Scheme.
Investors will be able to get a 20 per cent tax offset, rather than a deduction and a capital gains tax exemption. The offset model has been chosen instead of a deduction as it benefits people more evenly across income groups. This will cost $106 million over four years, with most funding kicking in after 2017.  For example if someone invests $200,000 and claims the offset they will reduce their income tax by $40,000. Then if the investor sells their shares three years later, their initial $200,000 will be exempt from capital gains tax.
The aim is to encourage more private sector investment in start-ups,
(My view is this will cost +$1b and will be money well spent!! )
University funding incentives for business to make greater use of the university sector, making use of the 70pc of Australia’s PHD students, the government will allocate $127 million over four years of research block grant funding towards collaboration between industry and universities. This includes new arrangements to measure the “non-academic impact and industry engagement” of universities, with the first national assessment due in 2018.
Visas: There will be a new entrepreneurs visa created to bring in international talent, and post-grad students with STEM or ICT talent . Visas will be fast-tracked for permanent residency to begin by November 2016. This will cost $1 million from 2015 to mid 2017
Offshore ‘landing pads’: The government will encourage Australian entrepreneurs to more easily travel to Silicon Valley, Tel Aviv and three other unknown locations, likely in Europe and Asia. This will cost $18 million over four years. This will be an interesting programme!!


CSIRO:  $200 million to the CSIRO  placed into an innovation fund aimed at co-investing in new companies and existing start-ups developed by the CSIRO itself, publicly funded research agencies or universities. Only $15 million funded by budget- balance by receipts from Cairo royalties and private capital .

If some of these policies are not as successful as we like, we will change them. We will learn from them. Because that is what a 21st century government has got to be,” said Prime Minister Malcolm Turnbull.