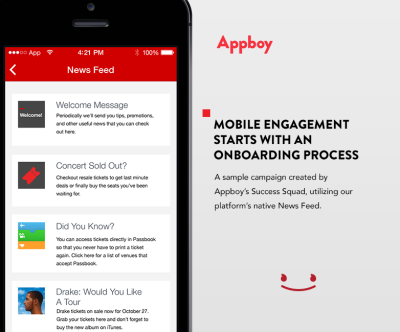 Appboy, a company that helps mobile app marketers better retain users and keep them engaged, is today announcing $7.6 million in Series A funding. The round was led by Icon Venture Partners, and saw participation from new investors IDG Ventures, and Mike Lazerow, founder of Buddy Media. Existing seed investors, including Blumberg Capital, Accelerator Ventures, Bullpen Capital and T5 Capital, also participated.
The company has raised a total of $7.6 million. However, in addition to the $5.1 million in Series A funding, Appboy previously raised $2.5 million via convertible note seed financings, which have now converted.
While a number of companies from the earlier days of the mobile app ecosystem have focused on helping app developers acquire new users, Appboy is about taking the next step. It helps companies keep their users by offering a suite of tools that enable companies to better understand their user demographics, so they can engage them in a timely fashion through in-app messages, push notifications and even email.
“It’s not an acquisition game anymore. I really believe 2014 will be about user engagement, retention – those kind of numbers – rather than how many downloads you had,” says Appboy co-founder and CEO Mark Ghermezian.
Once integrated into an app, Appboy’s platform immediately begins creating a rich profile on all the app’s users. Ghermezian explains that it’s not really an analytics platform, despite some similarities, but a mobile user management platform.
“If you want all the different, crazy charts, we’re not that,” he says. “But if you want to understand your users down to a per-user level, and manage all your communication with them…that’s what we are.”
The company has already found traction with some well-known app publishers on the App Store, including textPlus, Pic Stitch, GSN (Game Show Network), Urban Outfitters, and a variety of digital magazines through a channel partnership with Mag+.
After user profiles are created, Appboy offers multi-messaging marketing tools that let its customers choose how and when specific groups of users are contacted through push notifications, messages within the app, or via emails. The company also provides a “news feed”-like product that developers can place in their apps, too, which allows them to keep users updated on things like new friends or comments, new features, new activity, and other alerts. Though a relatively new product at Appboy, app makers are already seeing 25-30 percent clickthrough rates in the news feed, says Ghermezian.
The founder believes that Appboy is the next evolution in marketing automation tools. He references companies like Buddy Media (whose founder has now invested in Appboy),ExactTarget, Radian6 and Marketo as examples of companies (several acquired by Salesforce) that focus on various aspects of online marketing, but points out that none offer a mobile solution.
Appboy, meanwhile, is designed not for the developers or the data scientists who pore over the charts and graphs from analytics providers, but for the marketing crowd. The dashboard lets its customers create campaigns using simple tools that slice and dice a larger audience into specific groups based on several factors, including demographics, social profile data, in-app behaviors, in-app purchases and more. That way, app marketers can target groups like “recently lapsed” users or “high spenders” or “passionate fans” in personalized, unique ways.
Sydney Could Emerge As An Equal to San Francisco’s Tech Scene If Only . . . Shared by Mike Cannon Brooks
Stop it!! there is still time on the clock